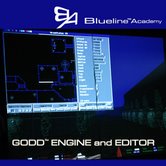 After many years of research and development, one of E.J. Gold's most amazing work tools is finally coming to fruition. Available to you is nothing less than creating new worlds in the void; a pixel deep and as real as any other world with characters who have a life of their own. This tool has many surprising aspects right from the start. It forces you to new, profound levels of attention. It will challenge you in unforeseen ways. Being the creator of a world empowers you in ways you may have never known. Is there a learning curve...yeah, you bet.

As "Gorebag Sez" during a recent Sunday morning workshop: "Take responsibility for your part of GODD". What do you do once you're in the waking state? A major tool in the antime yoga, the BluelineTM Academy gives an answer to that question. How do I work in the waking state? Join us and find out. It really is quite amazing what is happening. This course is available to everyone. Find out if you have what it takes.

For the Basic BluelineTM Starter Kit, to become a student of the BluelineTM Academy or if you want to be part of the team, call us at the Bardo Training Center at: 530- 271-2239.

See the pictures below for a glimpse behind the scenes.

E.J. Gold on What you can do with the GODD Engine

E.J. and the GODD team have released the GODD engine and Editor. The first CDs were shipped recently to the folks who had signed up at the workshop in September.

What is the GODD engine: this engine enables you to create worlds out of the void.That process, the accompanying radiations, and the training of attention will have profound effects. E.J. has called it a major tool of the antime yoga.

Get a glimpse of what you can do with the Blueline GODD engine and editor as described in a communication from E.J. in November 2007 to those of us working with this, posted here with his permission.

"I note that Otis has finally joined the digital arts revolution --
I've been developing and designing videogames for over two decades now, dating back before Wolfenstein, and it suddenly occurred to me that they might not have an engine/editor/models/images system even close to the GODD(tm) level, whereby a single designer/developer can create a game environment, characters, textures, sounds, weapons, devices and gimmicks working totally alone, with no need for a support team of any kind.

Of course this is a teaching device, not a release engine, and that should be understood from the very beginning. It is useful for Proof of Concept and for basics of what tools are available in the industry. It is notable that every other virtual reality system requires a fairly large team of specialists. GODD(tm) does not. For me as an artist, developing a system which enables me to produce characters, environments, sounds, sights, effects, weapons and gaming concepts without the need for a development team means that I can remain totally within the bounds of unlimited personal instinct.

The GODD(tm) system we developed is an artist's delight. It does not require engineering or math, nor digital experience. It gives the artist an opportunity to explore the digital gaming world without having to also delve into the worlds of math, physics, engineering and binary skills.

All the artist needs is a mouse and keyboard and a tutorial in the concepts of videogaming -- meaning how to make a game that's fun and challenging and interesting -- and he or she is well on the way to creating a new and exciting game.

The development of the environment is totally under the control of the game artist. Every element is completely malleable and changeable by the artist without the use of a development team. Absolutely every aspect from sound to sight to playability to game balance and level of challenge is under the direct control of a single artist acting independently.

An eight-level game can be achieved in two semesters by any artist without any digital experience whatsoever."