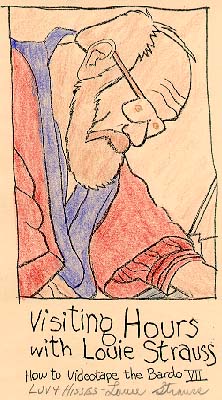 "This is the first time one of my performances has been captured on film. So many of my friends here at Vickers Psychiatric Hospital have seen my performance with such good results that it's time the outside world was exposed to the genius of my compositions. There have been comparisons to Beethoven and Carl Stalling, but my modesty will not allow me to admit such exalted company. I look at each performance here at the Institution as a contribution toward my goal of someday leaving this place. You who see this video are my only link to the outside world. I'm very lonely. Thanks for spending some time with me. Watch for my new album, Straight No Jacket." -- Louis Strauss

"You ain't kiddin' me. This guy is not from this planet!" -- ZAPHOD

"We owe everything we know to Mr. Strauss. Thank you, Looey!" -- THE MORONS

"Hearing his music makes me want to chop off both my hands in shame." -- SNARGO, drummer for Zaphod & the New Harmonics

"Louie's music expresses a multitude of mixed emotions ranging from the crass to the unbearable lightness of an innertube. -- JAMES LEONARD of THE LAUGHING DOGS

"I wouldn't exactly say Louie's music swings but it does approach iridescent chrome-dome levels of Jackdom." -- SLOJACK from THE KOJACKS

"I never would have gotten to where I am today in the music industry without having listened to Louie's music first." -- MATTHIAS SCHOSSIG, accountant of THE TERMINATORS