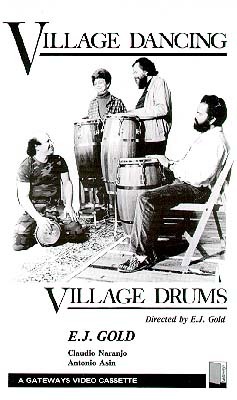 Claudio Naranjo's wife, Elena, had promised one of the children in the community she would do her best to be there for the party on her fifth birthday. The day after the celebration, the Naranjos, Fourth Way teacher friends of Mr. Gold's, and the Asins, their friends, joined with many of Mr. Gold's close pupils for a day of work together. What you see on this videotape is the progression of the topic of the Simurgh as it was investigated throughout the work day, completely unrehearsed, as it happened.

Initially the experiment is conducted using a group of people who have never drummed together. Then, later in the day, you will see the same idea -- that of each drummer as part of one creature -- used by a group that has drummed together for five years, including Menlo Macfarlane, one of the top international instrumental percussionists in North America.

It is actually like a village situation where the drummers listen to one another, drum together and become one. This is a real demonstration of the idea of building a cluster and directing it into unity.