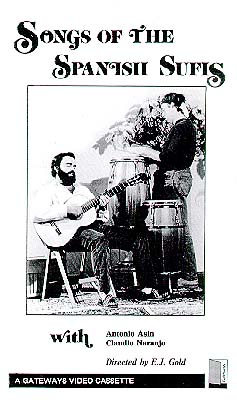 Songs of the Spanish Sufis

In each work community there are songs which have special meaning to the people in the school. These songs are chosen to express their feelings about work ideas and usually relate to a specific period of time, a specific group of people and a specific place of work.

In some cases, the songs themselves convey the feeling, and in other cases the delivery. The lyrics become irrelevant; the feelings with which they are sung and played are where we should focus our attention. They might be children's songs, play songs or lullabies. The mood is the rudder by which we steer our boat.

The songs on this videotape are sung by Antonio Asin, a 4th Way teacher from Spain, visiting another teacher-friend of Mr. Gold's, Claudio Naranjo. Claudio's wife, Elena, had promised one of the children in the community that she would come to her 5th birthday party. Although it appeared unlikely, on the evening prior to the birthday, the Naranjos and the Asins arrived back from Spain and called on the morning of the party to say that they were on the way, much to all the children's delight.