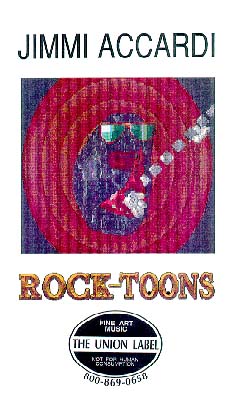 This premiere music video release of the artists on The Union Label showcases the music of Jimmi Accardi and performances involving Jimmi with video collaboration work from computer animator Tim Elston.

Karma Man, Jimmi Accardi and the PVT's. This New York performance bring back memories of the psychedelic performances done by the big bands of the '60s a la The Beatles, The Rolling Stones, etc.

Tutcha Rock, Jimmi Accardi. The idea for tutcha Rock germinated out of a very successful commercial for the American Booksellers Association Convention in the spring of 1990. It grew to its present format and was introduced to a standing-room-only Labor Day Weekend crowd and received a standing ovation which brought the house down.

Get Me Down From Here, Jimmi Accardi and the PVT's. This is the music video that introduced the PVT's to the video world. Computer animation melds with live action to bring a dazzling display to the screen. Original song written by Jimmi Accardi.

Get 'im Outa Town, The Laughing Dogs. Yes ... Jimmi Accardi has been playing professionally for over 20 years. This music video produced for Columbia Records in 1979, shot on location in New York's Times Square, shows the staying power of Accardi's music. The song was written by Jimmi along with Ronny Altaville who co-wrote Tutcha Rock.

Work, You Sneakers, Work, Sneakers After Truth. All right! The newest kids on the block, Sneakers after Truth, take-off with a new song by Jimmi Accardi.