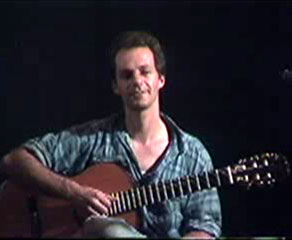 An Evening Shot to Hell

Parker Dickson's songs have provided a vehicle for the expression of work ideas through music. The atmosphere created by these songs has made them a way to bring the ideas into people's lives where other means may not be as effective and accessible. Work songs often provide understanding in the heart not as easily gained through books or the spoken word.

Parker has woven the ideas into well-known folk melodies. The songs are a wonderful group activity. They are great to listen to, and even more enjoyable to sing along with.

The ideas are presented in a gentle manner with humor and simplicity. Parker comes into your workspace with warmth and sincerity like the old friend he is to many thousands of us.

Mise En Scene: Many years ago Parker Dickson placed himself in a position of being "The School Songwriter", and became an invocant for these songs. He insists that he doesn't actually write the songs, he just writes them down, channels them into existence.

He brings to this task a solid background as an exceptional Classical guitarist, and the full range of his talent is subtly expressed in the simple styles of folk music. Menlo Macfarlane joins Parker with his off-the-wall humor and general craziness -- an aspect of Parker and Menlo working together which the Core Group has come to accept with gleeful resignation.

The school concert and singalong which you may now access on this videotape is unusual in its intimacy and spontaneity. What you see is typical and unrehearsed. Go ahead. Join in ...

The Technicians: The DVD you hold in your hands has been produced under the technical direction of E.J. Gold. He brings to video many years of film experience and shares his talents as an editor and cameraman with several members of the community who have a background in film. As well, a few members of the group were given the opportunity to use video equipment for the first time under careful supervision.

With the advent of professional broadcast quality three-quarter inch equipment, Gateways is now able to provide you with a full body of new and adventurous work material. Some tapes are also available in 3/4" and 1" broadcast format.