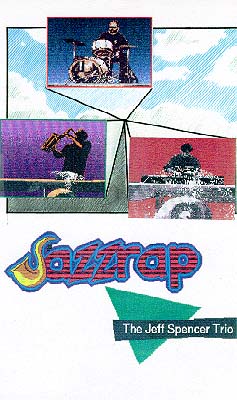 with the Jeff Spencer Trio

Shutdown Part III. One of the few times that the Jeff Spencer Trio has been caught live on video tape. This private performance was shot December 15, 1990. Louis Strauss joins the group with some mind-ripping sax work. Guitar Boogie Shuffle A photo shoot of the Jeff Spencer Trio with famed photographer Bill de Groot is the bassline for this playful romp of the band through the recording studios of The Union Label. Toasted special effects and pixellation create visuals that complement this one-of-a-kind music video.

The Shemutti Plain ...er plane. This music video had its principal photography almost complete when a crop duster flew overhead and a whole new world of possibilities manifested itself. This moving, travelling musical number became alive and kept raising the ante, daring us to find a way to complete it.

Twinkle Twinkle, Little Star. A tweaked look at a child's folksong combined with a surrealistic view of the story of Pinocchio make this a fun video. Gepetto and the Pine People play the music of the Jeff Spencer Trio. Arab Love Life Dancer Zoe Alowan performs a dance of mystery to this song from "Visions in the Stone".

Diddler Arounder's Soiree. You may have seen the Special Birthday Edition of this video which was released the winter of 1990. Well, this one isn't the same. Who are the G-Men, anyway? And are they related to the Kojaks? Higher Being Blood Jazzrap was a term coined by band keyboardist and guitarist Jimmi Accardi after viewing rushes of their live performance, "Higher Being Blood" of December 15, 1990. Louis Strauss's sax playing gives a jazz flavor to this insane concoction of a rap song that's funked out of its brain!! Dig it!