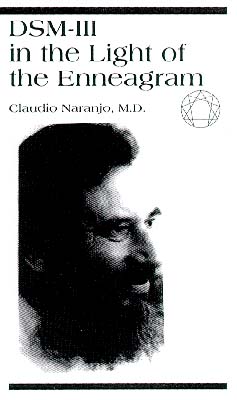 DSM III in the Light of the Enneagram

Claudio Naranjo, M.D. studied medicine, music and philosophy in Chile, where he also was a resident at the University of Chile Psychiatric Clinic under Matte Blanco, taught psychology of art at the Catholic University and social psychiatry at the School of Journalism, University of Chile, and came to be director of the Center for Studies in Medical Anthropology. After coming to live in the U.S., Dr. Naranjo was on the staff of the early Esalen Institute, where he became one of the three successors to Fritz Perls. Later his life's pilgrimages brought him in contact with various spiritual masters including Swami Muktananda, Idries Shah, Oscar Ichazo, Suleyman Dede, H.H. the XVth Karmapa and, most decisively, Tarthang Tulku Rinpoche. Also, he was once Research Associate at the Institute for Personality Assessment and Research in the Berkeley Campus and associate of Raymond Cattell at the Institute of Personality and Ability Testing. He has taught comparative religion at the California Institute of Asian Studies, humanistic psychology at the University of California in Santa Cruz, meditation at Nyingma Institute in Berkeley, California, and was the founder of SAT Institute, an integrative psycho-spiritual school.

He is the honorary president of two Gestalt Institutes, Fellow of the Institute of Cultural Research in London and member of the U.S. Club of Rome. He is considered one of the pioneers of the Human Potential Movement and his introduction of "Fourth Way" ideas to psychotherapy is an instance of his work as an integrator at the interphase between psychotherapy and the spiritual traditions. He is dedicated to an integrative and transpersonal education of psychotherapies in various European and South American countries.

His written work includes The One Quest (Viking Press, 1972), The Psychology of Meditation (Penguin, 1972), The Healing Journey (Pantheon Books, 1974), Ennea-type Structures (Gateways, 1991), Gestalt Therapy/Attitude and Practice of an Atheoretical Experientialism (Gateways, 1993), Gestalt After Fritz (published by Era Naciente, 1993 as Gestalt sin Fronteras), The Crisis of Patriarchy and the Hope for a Tri-une Society (Dharma Enterprises, 1994 and Kairos, 1993 as La Agonia del Patriarcado), The Divine Child and The Hero (appearing through Sirio, 1994, as El Nino Divino y el Heroe), Enneatypes in Psychotherapy (Hohm Press, 1994) and Los Males del Mundo, los Males del Alma (The World Problematique and The Love Crisis) (through Planeta).

In this video, Dr. Naranjo compares the ancient study of enneatypes with the character descriptions in the current Diagnostic and Statistical Manual of Mental Disorders. Dr. Naranjo points out several syndromes well-described by the enneatypes but overlooked in the DSM catalog of pathologies. Transcending the pathological viewpoint, the enneagram system can be used as a way of personal growth in the well-adjusted individual. This talk introduces the enneatypes to professionals, and is a companion commentary to the author's book, Character and Neurosis.