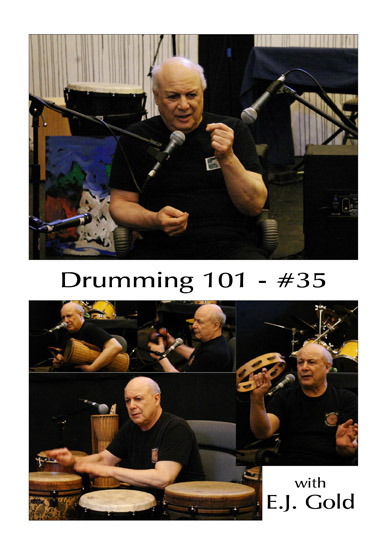 E.J. begins the class with revealing his purpose in drumming, explaining that he doesn't do anything casually. He only has so much time to work with in this life. The way you may spend money, frugally, is how he spends his time.

In this class he'll demonstrate how drumming is used to create a vortex. It starts by the recognition of how the school works. You're performing a school task -- an Essential Obligation, Obligato.

An exercise was given to further the understanding of the concept "My 10,000 Year Lineage" in relation to the school. And what E.J. wants to demonstrate with this, he performed on beat as an impromptu, poetic, narrative -- And Here You Are To Tell The Tale.

It all has to do with waveforms. A waveform is a series of transforming shapes -- a blob moving around to particular frequencies. Frequency refers to how often it moves. Since the shape is cyclic, that means it repeats itself for how ever many cycles over a period of time

In a drumming circle, it's important to understand that everyone holds their own. Everyone plays their part and it fits together like a puzzle. If all the pieces of the puzzle are the same shape, it doesn't work

"This was like entering a trance state. I went deeper and deeper into the rhythm and felt a deep desire to leave my body. My legs, heavy as they were, were feeling the need to move and dance. I felt a swirling, powerful energy moving around me. My third eye was pulsing and I felt I was accessing an ancient wiser part of me."

A vortex is one end of a wormhole. The other end of the wormhole is unknown to you. Therefore, it's best if you learn how to create those from someone who does have knowledge. You want to avoid those bad vortex hook-ups, i.e. with Beelzebub or Cthulhu. It's best to have known areas of attachment for your vortex.

Drumming is not the only way to set up a vortex; it's a very good, easy way that works. A vortex can be set up by an individual or with a group. Doing it with a group will give you a stronger vortex and a wider funnel. You want the widest possible funnel -- 16 feet wide is a good center. It's a black hole existing in a different time / space framework, basically, offset to this universe, so it does not interact with things of this universe, matter or anti-matter, or any products of this universe that we consider to be space-time continuum products or by-products. Yet, it's tangibly there.

In the 1997 movie ' Contact ', based on the novel by Carl Sagan, an astronomer is trust through a black hole / vortex. Upon ' landing ' she begins to ' test ' the atmosphere around her by ' feeling ' the sky and ' feeling ' the space around her. The space responds just like the description in this video - gelatinous - a gelatinous blob - a rippling effect - etc. It's interesting ( to me at least ) that in 1997 this effect, this idea was being shown to audiences around the world."

E.J. described numerous changes in the space and perceivable phenomena that you may notice when creating a vortex that's working well. Actually, what you're doing when creating a vortex through drumming is you're changing the gelatinous atmosphere. If you're sensitive, you can see the drumming is changing the internal shapes of the structure, the sub-structures inside the gelatinous atmosphere, so you're getting a ripple effect

In class, we're going to create a gelatinous blob and make it dance. At first the blob will listen. I will alter my drumming to catch the blob's response. It's like love-making in the sense that instead of imposing movement on the effect, you're actually moving with the ripple effect of the entire combined whole. You're dancing with it rather than imposing your own style on it. It's not the drum or the drumming; ultimately it's the drummer.