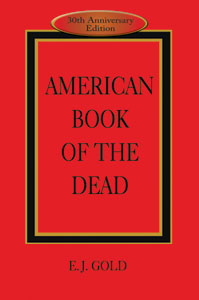 The American Book of the Dead

Preparing for what comes next ...

The American Book of the Dead,written by E.J. Gold in 1971, was the first book of its type, providing an English translation of the teaching set forth in the Tibetan Book of the Dead, and initiating the now widespread movement to ennoble and acknowledge the process of death and dying.

The American Book of the Dead, now available in its 30th Anniversary Edition, is used by practitioners the world over to read for those in crisis, those who are dying and those who have passed.

Many practitioners have taken the Labyrinth Readers Course to train them to use the readings. There is also information on how to use the book on The Clear Light website.

The Labyrinth Readers Society works to distribute the ABD free of charge to hospices and hospitals and to offer training to both hospice workers and individuals in effective methods of working with the terminally ill and their families and loved ones.

E.J. Gold reads the Obligatory Invocation from the ABD

Leilajiva reads the The Symptoms from the ABD

Click here for playlists of all Leilajiva ABD reading videos

After reading the 48th chamber this morning, I had the following thoughts:

I guess it's obvious when you think of it that death is the biggest transition we face in life (that we know about). After all we lose our friends, family, work, possessions, etc. You can't take it with you may be trite but it's also very true. But perhaps not so obvious are the transitions we face everyday.

We may move, lose our usual jobs, our relationships, our freedom, our possessions due to nature, our own actions, societal changes, etc. I guess that's also obvious when you think about it, but most of us prefer not to. Perhaps this is one aspect of being "asleep."

Daily readings of the American Book of the Dead can keep us aware of this to some degree, at least. The less I take things for granted, the more I am able to appreciate the things and relationships I do have, at least for the present. :-)

My friend Robin was scheduled for cancer surgery early in September, right before Labor Day. A CATSCAN had found a mass in her intestines between the small and large intestine that hadn't been there in May.

It was fast-growing and they thought it had spread to the lymph nodes, which was bad. The first surgery was canceled because the doctor was ill. She had the surgery on Tuesday following Labor Day. Meantime I began an ABD reading for her myself and alerted people at the Institute of what was happening. Everybody quite generously devoted some of their energy and concern. One person had a dream in which it seemed Robin would come out of it ok.

In fact, she came out better than OK. The cancer had not spread to the lymph nodes and had been contained in the intestines. The surgeon thinks she got it all. None of the biopsies outside the mass came back positive for cancer. Robin is home recovering and improving. The hope is that she can avoid chemotherapy which would be great.

Thanks to EJ, Yanesh, and all the people who took their time and energy to help. This was a team effort and it seems to have a very positive outcome so far.