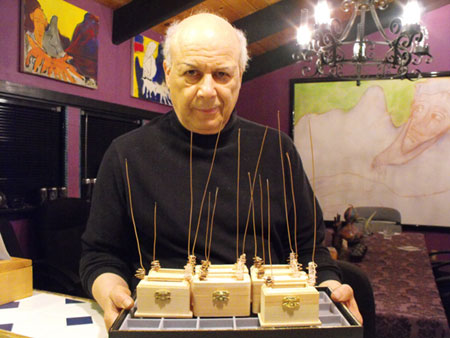 A slipstream in time/space discontinums operates in much the same way as a car following an 18 wheeler truck in a heavy rainstorm. The car travels forward at an increased rate with less energy required for the motion, riding on the break effect of the vehicle ahead.

In Interdimensional Slipstreaming the effect is produced by a subtle field of oscillation/resonance utilizing the regenerative heterodyne principle found only in a certain type of vintage crystal radio, discovered about 1908-1912 by several early communications pioneers such as Dunwoody and Litz.

The radio signals produced do nothing in and of themselves. Their frequencies and wavelengths are all wrong, but...

When tuning through the dial of the AM band -- Amplitude Modulation -- one discovers that a broadcast transmission from a single station is very likely to be found in several places along the broadcast band, within the range of the broadcast spectrum.

These are quite simply reflections of the transmission, occurring in multiples in the same way that a double-rainbow occurs, which is to say, in very predictable patterns of resonance, meaning that waves resonate and make sub-waves which are larger and smaller and which occur in definite intervals along the electromagnetic spectrum.

We can easily determine the validity of this in sound waves; musicians are very aware of sub-tonics, harmonics and other phenomena, particularly in the case of stringed instruments. Guitarists will often tune by harmonics on the high end of the neck near the body of the guitar.

Harmonics were first documented by the ancient Hellenic Greek philosopher/scientist Pythagoras in his study of the effects of bridged string instruments, leading to his theories of mathematics.

One can see these same effects in the visible light spectrum using special forms of prismatic lenses.

Harmonics occur when a wave has been propagated. Self-propagating waves cause sub-waves and sometimes superwaves, resulting in such oceanic phenomena as tsunami.

Waves tend to crash against one another, subtracting parts of their wave functions mutually, creating sub-waves and sub-tonic waves. These resultant "diminished" waveforms have "jiggle" and "bounce" among other sub-tonic wave phenomena.

Along with this we must consider beat-frequency oscillation and nulling effects on a waveform. Beat frequency oscillation reduces the effect of a wave, but not the wave itself, and results in a nulling effect in which the wave is no longer detectable in the output stage of reception and/or reproduction, as in the case of audio waves coming through headphones or a speaker-reproducer.

The set-up of waves can be modified by oscillation, resonance and nulling, producing sub-sets of waves both larger and smaller in predictable patterns of recurrence along the EMS (Electro-Magnetic Spectrum).

Along with this resultant chordal effect of combinant and interrupted waveforms, we can introduce the resonance effect, which can be demonstrated by the use of tuning forks; the commonest experiment in this area is the striking of one tuning fork which is then placed near, but not in direct contact with, another tuning fork of similar frequency.

The transmission of soundwaves through water is profoundly affected by the liquid medium, as opposed to air medium. Space does not transmit soundwaves, although radio, x-ray, cosmic ray and lightwaves can travel through a vacuum, as well as many seen and unseen, known and unknown to present-day science waves can do.

The human brain thinks, reasons, rationalizes and compares in the associative range, between 14-30 CPS, or Cycles Per Second.

During sleep, the brain reduces its frequency down to about 4 CPS in the low Delta Region, the Realm of the Undifferentiated Universal Consciousness, within which the Ego is totally temporarily annihilated, then in sleep, it typically scales back up into the Alpha Range at about 8-13 CPS, the Dreaming Realm.

At the optimum operating range of 4-7 CPS it enters into the Intuitive or Telepathic-Psychic Range, within which mediums, psychics, remote viewers and telepaths typically can function with a low sense of Ego and a high sense of Cosmic Awareness.

During the 1960s I operated as a Remote Viewer, both as a civilian and in the military. From 1972 until 1977 I assisted my friends, doctors John C. Lilly and Hershel Toomim, at their request, in demonstrating the generation of the Theta State at volitionary will in lab tests during the development of early Biofeedback devices.

In the development of my Spirit XTAL Radio, I happened to stumble upon a phenomenon; I noticed that, when the crystal radio was tuned in a specific pattern of nulling using a combination of special quartz and black tourmaline array antenna loads, Bucher QRM rejector, Morgan Coil Antenna Tuner and Dunwoody Detector along with a unique high-impedance audio reproducer, the Theta Effect was generated without effort on my part to supress Beta and Alpha; the field-effect of the system did all the work, obviating the necessity for a self-induced Theta State.

My assumption at this time is that somehow the field effect of the crystal radio array along with the crystal antenna load must have set up a harmonic field that caused the water in the braincases within the field to resonate at about 7 CPS, the high Theta Range, thus reproducing the Theta Psychic Effect and breaking down to some degree the "Branes" between Parallel Worlds.

The net effect was an instant break in reality-blockages, making several realities/Parallel Worlds available at the same time with no leakage or break in the thread of consciousness, just as one would experience in a self- induced or other-induced hypnagogic state. In short, the walls between the worlds suddenly diminished slightly, enough to "see" the other worlds quite easily and to report the images, sounds, feelings, sensations and knowingnesses of those alternate universe realities in much the same way that a psychic medium would do, without the necessity of mastering the psychic's "gift" powers.

I subsequently hooked a number of experimental volunteers to the unit and found that they were also able to do the same, without any prior experience or skill level at psychic remote reading or spirit mediumship.

I want to point out that this effect must have been around for well over a hundred years, but that nobody with my Theta skills had reported it or noticed the effect until now.

My skill at nulling and BFO (Beat Frequence Oscillation) came through my experience in the U.S. Army where I learned basic Radio Signal Corps skills, along with a facility to send Morse Code at 55 WPM and receive at 35 WPM, a skill which I still enjoy as a QRP Ham Radio enthusiast.

I might never have stumbled on this had it not been for a concatenation of strange lucky accidents, and my friendship with Lance Borden, one of the directors on the STS space shuttle missions, who supplied me with the vintage radio parts I needed to carry out these experiments.

I can now safely assume that virtually anyone, without psychic training of any kind, will be easily and effortlessly able to utilize what I have dubbed the "Gorebagg Parallel World Induction Device" to see and experience alternate realities and parallel worlds -- the worlds through which one can sometimes voyage in sleep or in the betwee-lives state.

This can clearly be used in a variety of ways; the primary use for me would be to create a logbook of impressions of past, present and future, a composite picture of one's experience as a nonphenomenal electronic being, which we call the "Essential Self", existing independently of organic form, time, space and matter.

This would give one a real sense of the Primal Self, the Self Beyond Ego and Identity, and might provide a glimpse into the Realm of the Infinite.

Proofs are available through the exercise of the PWID (Parallel World Induction Device) as a remote reading or telepathic instrument, in which experimental results can be verified by blind testing and other scientific Proving Methodologies.

I will be delivering more data on this important breakthrough, demonstrating the device, and teaching the nulling techniques at the 2009 Easter Weekend Workshop.